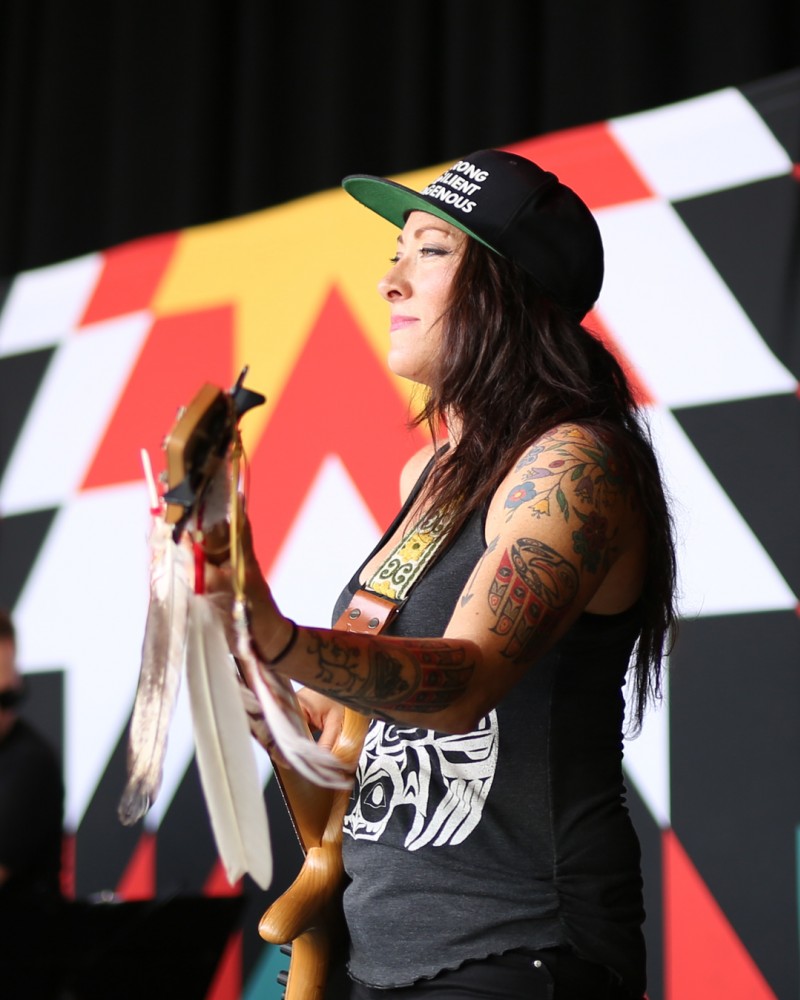 MJ Dandeneau is a French Anishinaabe / Métiskwe born in Treaty 1 Territory (Winnipeg, MB). Her tours and studio work have literally taken her all over the globe and nationally recognized with recording awards such as Canadian JUNO, WCMA-Award & CFM-Award. MJ’s deep-seated roots to her French-Canadian and Métis heritage are translated and embodied in the music she creates.

Over the past 15 years, MJ has created a fiercely independent musical history as a professional touring bassist that includes numerous TV performance productions, studio session recordings, producing and performing around the world(Europe, UK, North America, Scandinavia, Asia, Australia, New Zealand). Her musical path has led her to play with many international artists Buffy Saint-Marie, The Violent Femme, Xavier Rudd, Digging Roots, Crystal Shawanda, Rose Cousins, The Good Lovelies, Don Amero, just to name a few, ultimately attributing to her ability to be versatile and well versed in many genres of music.

MJ’s multi-faceted talents have given her, through her own business, MJ Entertainment Canada Inc, the ability to be an effective Booking Agent, TM, Composer and Producerfor the past 12 years. She continues to tour around the world with different artist as well as Sound Designer/Composer for musical theatres such as MTC’s production premier “Bitter Girls”, MTYP’s “Charlie Brown’s Double Bill”, “Torn Through Time”, “Tiny Treasure”, Prairie Theater production “Both Alike in Dignity!” and Cercle Moliere premier production “La Liste”. She also continues to work with the National Film Board and various film projects to create film scores and soundtracks.

Never forgetting where she comes from, MJ gives back to her community by acting as a juror for the Canada Art Council, FACTOR, Manitoba Art Council, MARIA, Winnipeg Art Council, Ontario Council of Folk Festival, Manitoba Film & Music, Western Canadian Music Awards & JUNO Awards, and by offering workshops to emerging artists in schools across Canada.