One month to go! 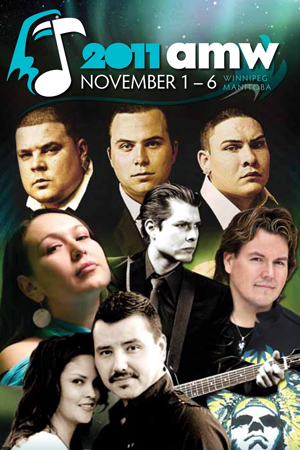 Can you believe another year has passed already? And Aboriginal Music Week is just around the corner! Such a great way to kick off a new season. It feels like Christmas…or a school reunion. Or when all the cool kids just get together and hang out. And there are some pretty cool kids coming to hang out this year.

Also at WECC, we’ll have a Hip Hop Night on Wednesday, Nov. 2, with Winnipeg’s Most, the Local Onlyz from Regina, and premiering the Jr Just TV group – a collective of young artists from the Broadway Neighbourhood Centre.

All shows at the West End Cultural Centre are family friendly events.

We’ve partnered with Tracy Bone and JC Campbell to bring you the All My Relations stage for three nights at the legendary Windsor Hotel. We welcome Gabriel Ayala, Christa Couture, Wayne Lavallee, Will Belcourt & the Hollywood Indians, The Johnnys, JB the First Lady and Nathan Cunningham to that stage.

Over at The Pyramid we’ll have three great nights of music with the SaskMusic Showcase kicking it over there. Donny Parenteau, Conrad Bigknife, Mitch Daigneault and Riva hit the stage at 9 p.m. on Thursday, Nov. 3.

Tickets to individual shows are on sale now, or you can purchase a festival pass at www.aboriginalmusicweek.ca