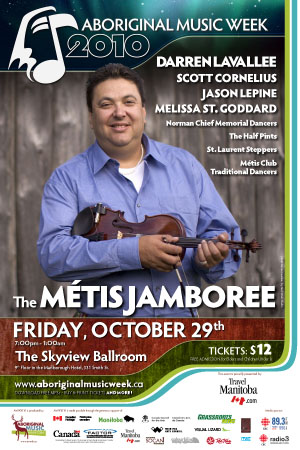 We’re presenting some great artists this year and it all starts with the Métis Jamboree, presented by Travel Manitoba, on Friday, October 29. Check the videos below for a taste of what you’re going to see at the Skyview Ballroom for this event.

Purchase and print tickets at www.aboriginalmusicweek.ca.

DARREN LAVALLEE: From St. Ambroise, Darren Lavallee has been dubbed the “Marvelous Métis.” He was raised surrounded by music, dance, and the Michif language and is strongly traditional when it comes to his Métis roots. Darren has over 25 years of performance experience and has five CDs to his credit. In 2007, Darren swept the fiddle categories at the Aboriginal Peoples Choice Music Awards and the Canadian Aboriginal Music Awards with his Backroads Fiddlin’ album.

SCOTT CORNELIUS: Scott is a 12 year old fiddle player from the Roblin area. He has been playing fiddle for 4 years now and has won many awards. He is true showman who will have you on that dance floor from the moment he strikes his bow.

MELISSA ST. GODDARD: From Portage La Prairie Manitoba, Melissa has been surrounded by music her entire life. Her Uncles, Darren Lavallee and Mark Morrisseau, both accomplished fiddle players, were a major influence on Melissa. Melissa received her first fiddle at age 13 from Uncle Armand Jobin and with the help of her sister Demi she began to teach herself to play and moved on to take lesson from Uncle Mark. Now at the age 19 Melissa is no longer taking lessons from her uncle but is instead helping him teach a group of young fiddlers.

JASON LEPINE: Jason Lepine is a 34 year old Champion Métis fiddle player from Portage la Prairie. Jason has been playing fiddle for 26 years influenced by his dad, Garry Lepine. Jason has won numerous fiddling championships in and outside Manitoba during his fiddling career. Jason is a freelance fiddle player who plays all over for festivals, socials, jigging and square dance competitions and numerous other events.