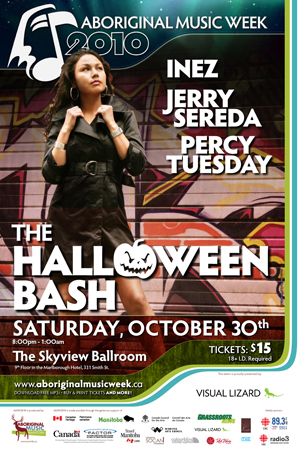 Get your costumes together now because we'll be using crowd applause to hand out prizes for the best Halloween costumes.

Everyone wearing a costume will be entered to win Aboriginal Music Week VIP Passes and a CBC Prize Pack.

Purchase and print tickets at www.aboriginalmusicweek.ca.

INEZ: Inez is one of Native Canada’s new school music leaders. Her blend of Sto:lo music and culture with hip hop and R&B earned her the top spot in multiple categories at the Aboriginal Peoples Choice Music Awards in Winnipeg last year.

PERCY TUESDAY: Percy Tuesday is Ojibway from the “Great” Big Grassy River Ojibway Nation in Ontario. He is popularly known as “The Reverend”, and is fondly recognized by fans and fellow musicians as a “legend in his own time”. Percy is a seasoned musician and entertainer and has performed in a multitude of venues during the past 35 years, travelling across Canada and parts of the U.S.A.

JERRY SEREDA: Jerry Sereda is a Métis songwriter from the prairie skies of the keystone province. An honest performer, his work ethic and musicianship have earned him performance spots alongside Shane Yellowbird, Donny Parenteau, Jason Blaine, and many others. His initial offering, entitled Campground Cowboy, carries a blend of the classic hurtin’ country with the modern rock twists found in today’s country radio hits.