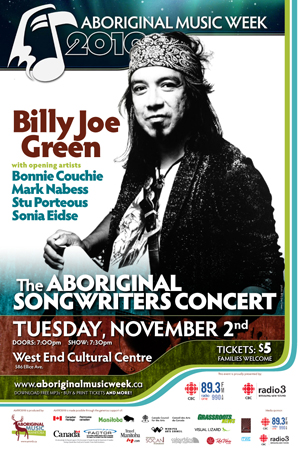 The Aboriginal Songwriters Concert, presented by CBC Radio One and CBC Radio 3, features a songwriting circle with Sonia Eidse, Stu Porteous, Mark Nabess, and Bonnie Couchie. Anishinabe blues legend Billy Joe Green will headline the night and tickets are just $5. The show starts at 730pm and it all goes down at the West End Cultural Centre in downtown Winnipeg.

BILLY JOE GREEN: As one of Canada's premier blues guitar slingers, Billy Joe Green earned his rambunctious, no frills approach to the guitar honestly, as a rockin' swaggering sideman for such acts as THE FEATHERMEN, JACK'S SCOUTS, CHEZ BOJECK, WHYTEFEATHER, KID SILVER BAND, WILL JOE TRAVEL EXPEDITION, ALEX PARENTEAU BAND, PERCY TUESDAY, ROBBIE BRASS and countless other than main stream configurations of bluesy, rockin', high voltage, loud and progressive bands. He's worked with the drive & passion that would frustrate most musicians throughout western Canada and for a time in the western USA, patiently & diligently trying to find a place for his music. Billy Joe has been described as 'an incredibly talented, diverse and well-traveled musician' by John Scoles for SCENE Roots & Blues Magazine, and the description is well-earned.

SONIA EIDSE: Sonia Eidse is a new singer-songwriter from Winnipeg. She started out singing in local talent shows and contests. Two years ago, she learned the guitar, and is now finding her own sound. Sonia has played at numerous events in the city, such as the 8 Days in May Festival with the Dusty Roads Band and Aboriginal Music Week. Her influences range from Nina Simone to Neil Young. This year, Sonia has recorded her first professionally recorded demo with Norman Dugas Productions.

MARK NABESS: Mark Nabess began his musical journey as an adult doing sound tech for Ernest Monias and Edward Gamblin, two notable and respected musicians from northern Manitoba. During this time in the late 80’s, Mark played rhythm guitar and sang back-up for Gamblin. Mark cut his first demo in Norway House in a shack outside Gamblin’s residence. But it wasn’t until 2008 when Mark became a solo-act releasing a self-titled acoustic demo on MySpace under the name Jack Rabbit. His first single ‘Indian Town’ on the upcoming full-length CD was inspired by the many northern towns in Manitoba and Canada that Mark has performed in over the years. It went to Number 1 on the National Aboriginal Music Countdown.

BONNIE COUCHIE: Bonnie Couchie denied music’s burning force until the age of 30 when she first dared to profess it out loud. At that age having only tentatively played the guitar off and on since the age of 13, she looked around at all the musicians years younger and way ahead of her and felt she had no right to love music in that way. For the next 7 years she battled fear and doubt while writing songs and playing every single gig that she could find in the radius of her small town of Pic River, Ontario. Torn between her love of her home by the river and her passion for music, she created a house concert venue that welcomes and nurtures other musicians traveling along the lonely stretch of the Trans Canada Highway in North Western Ontario. Her debut album Feather for an Elephant was released in October 2009, and is nominated for two Aboriginal Peoples Choice Music Awards; and her single Stupid for You reached Number 2 on the National Aboriginal Music Countdown.