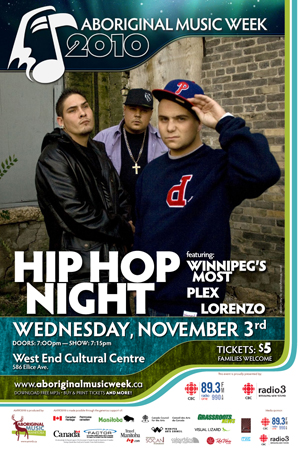 Hip Hop Night, presented by CBC Radio One and CBC Radio 3, features performances by Crown P, Lorenzo, and 2010 APCMA frontrunners Winnipeg's Most. Tickets are just $5, the show starts at 730pm, and it all goes down at the West End Cultural Centre in downtown Winnipeg.

WINNIPEG'S MOST: Winnipeg’s Most features the vocal stylings of Charlie Fettah, Jon-C and Brooklyn and the beatmaking genius of JUNO Award nominated producers Stomp and Jaymak. The group’s self titled debut has earned them two top spots on the www.streetzfm.ca chart along with four nominations at the 2010 Aboriginal Peoples Choice Music Awards.

LORENZO: Lorenzo, born Leonard Sumner, is an Anishinabe recording artist from the Little Saskatchewan First Nation, which ironically enough is smack dab in the middle of Manitoba. His music is best described as a “Rez kid’s mix tape” drawing inspiration from the hurtin’ country songs of his parents' radio player, and the experience driven realness of golden era hip hop.

2010 has already been a busy year for Lorenzo- he’s released a hip-hop EP entitled Rez Poetry and worked on his business skills at Manitoba Music’s Aboriginal Music Performers Camp (AMP Camp). The EP features music by industry veteran Geoffrey “Daybi” Parenteau and Montreal-based producer David Hodges. Two of the lead singles “Divine Beauty” and “Fly” reached the number 2 spot on the Streetz FM radio play chart in May and early June of 2010.

CROWN P: Crown P A.K.A. Tyler Bear is a 24 year old producer and emcee hailing from Saskatoon, Saskatchewan. Originally from Flying Dust First Nation he has a very strong connection to his native roots and background. His energetic and aggressive delivery capture your attention on every track. Grimy yet soulful vocals shine through over instrumentals put together by some of Canada's most notorious up and coming producers.