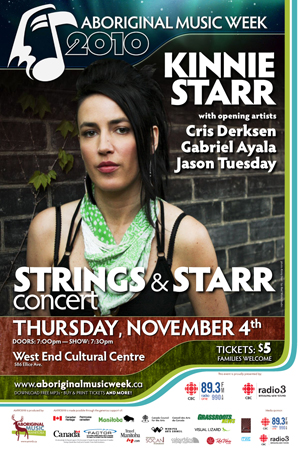 The Strings & Starr Concert, presented by CBC Radio One and CBC Radio 3, brings Kinnie Starr back to the West End Cultural Centre for a night of great music. The concert begins at 7:30pm with a “songs-in-the-round” presentation with cellist Cris Derksen, flamenco-style guitar player Gabriel Ayala, and classical guitarist Jason Tuesday taking turns entertaining the audience with innovative stringed compositions. Tickets for the show are just $5 and families are welcome to attend the show.

JASON TUESDAY: Jason Tuesday is an Anishinabe musician from the lake of the Woods in Ontario.

As a guitar player he is known for his percussive fingerstyle playing, influenced by more afrop-latin players. He attended the School of Music in Winnipeg where he learned the fundamentals of music and learned to share his vocal abilities.

Jason currently lives in Winnipeg and is constantly honing his craft by taking private and group learning sessions with local and travelling artists.

His single greatest influence, though maybe not musically speaking, is his father Percy a long-time country music singer who taught Jason the values of professionalism and respect for oneself and others.


GABRIEL AYALA: Gabriel Ayala is a member of the Yaqui people of southern Arizona. He is at the forefront of a new generation of Native Americans making a career performing classical music. He began playing the guitar as a child and earned a Master's Degree in Music Performance from the University of Arizona in 1997. Gabriel has taught at all educational levels from elementary through college, and serves as a competition adjudicator. Gabriel has released three self-distributed albums: “Self Titled” in 2003, “I’ll Be Home for Christmas” in 2007 and “Tango!” in 2008. He has also been a featured artist on several other CD releases. Gabriel signed with record label Canyon Records to release their first classical CD, “Portraits” on Canyon Records Explorer Series- Classical.

CRIS DERKSEN: Cris Derksen is a half-Cree, classically trained cellist whose captivating melodies and steadfast baselines have captured the attention of local and international audiences. She is a diverse musician, easily melding into hip-hop, rock, folk, country, or whatever type of music to bring an intense ball of musical passion to her work. Using a loop station and effect pedals, she is able to create an inspiring multi-dimensional auditory experience. She uses her voice in spoken word and song to layer melodies on top of each other to construct a song form in a way that is uncharted for most classical players. Using sounds from her inherited past Cris mixes the traditional with the contemporary over and over again in both the cultural world as well as the music sphere.